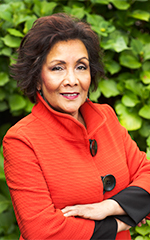 Dr. Hedy Fry is the Liberal Member of Parliament for Vancouver Centre. She served as Secretary of State for Multiculturalism and the Minister for Status of Women (1996-2002), and is currently Chair of the Standing Committee on Canadian Heritage. First elected in 1993, she is the longest-serving female MP in Canadian history.

Hedy Fry was born in Trinidad and Tobago where she graduated as class Valedictorian, winning a full scholarship for a Masters degree in English Literature at Oxford, England. She had done her undergraduate in French, English and Spanish literature, though her passion turned to medicine and she relinquished the scholarship to study medicine in Dublin, Ireland. Accepted into the program, she had one year to fulfill the academic requirements, which meant an intensive immersion in science from high school level to the equivalent of a Bachelor of Science in a single academic year. She completed her degree in Medicine with Honours at the Royal College of Surgeons.

She immigrated to Canada in 1970. She practiced family medicine at St. Paul’s Hospital in the West End of Vancouver for two decades and was a local, provincial and national leader in medical politics. She served as president of the Vancouver Medical Association (VMA), BC Medical Association (BCMA), and the Federation of Medical Women, during which time she was hailed as a powerful and successful negotiator. She hammered out a deal with then-premier Bill Vander Zalm that ended with a groundbreaking agreement that included Canada’s first retirement plan for doctors. Further, Dr. Fry led the CMA to recognize self-governance of aboriginals as crucial determinants of Aboriginal health. She was a spokesman for the CMA on issues of health, health financing and reforms, frequently speaking to US audiences about Medicare. Prior to being elected to Parliament, Dr. Fry was well-known to Canadian audiences as a panellist on the long-running national CBC television program Doctor, Doctor.

Dr. Fry began in 1993 as Parliamentary Secretary to the Minister of Health. She spent 6 years from 1996-2002 in Cabinet serving as Secretary of State for Multiculturalism and the Minister for the Status of Women. She was on a number of Cabinet Committees regarding health, social policy, volunteerism, homelessness and same-sex benefits. She was also the Minister responsible for the Vancouver agreement.