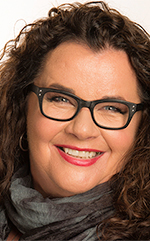 Barb is the Promotions Director at Roundhouse Radio 98.3 and is a Reporter for Shaw Television’s Outlooktv.  Barb can be seen nationally on OutTV, and has written for numerous publications such as The Huffington Post, shewired.com and WE.

She has been acknowledged for her many years of community service with a Vancouver Pride Society Outstanding Community Member Award, named one of OutTV’s “Top Queers of the Year” and made the GayVancouver.net Annual List of “Ten People Making a Difference in Vancouver”. She has been a Vancouver Pride Parade Grand Marshal (Local Hero), was awarded the 2013 TELUS Pride Legacy Award as Community Superstar, was a finalist for a 2014 City of Vancouver Award of Excellence Award, is an inductee into the Canadian Queer Hall of Fame and a YWCA Women of Distinction nominee.

Best known as megamouthmedia, the “quick with a quip” emcee of scores of Vancouver community events, Barb is proud to be affiliated with the amazing work that AIDS Vancouver continues to do for those living with HIV/AIDS in our community.