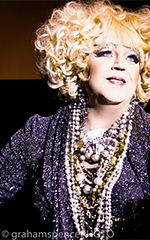 Developing a character named Conni Smudge has been a journey, over 2 decades in the making and one that has taken her around the Globe. She has performed in some of the most unlikely of places. From Biker Bars to the Grand Theatres of Europe, Mz Smudge has done them all.

Her wit, charm and approachable nature has afforded her the honour of being a highly sought after event host and spokesperson.  With an uncanny ability to break through barriers and draw the audience in, an evening with Conni is unlike anything ever experienced.

Based out of Vancouver British Columbia, Mz Smudge has been the face of several events and charities, including the North American OutGames, Outlook TV, Pride Vancouver, Qmunity, The City of Vancouver, and the Q Hall of Fame Canada to name just a few.

Mz Smudge has regular appearances on television as a reporter for OutLook TV and has appeared on the set of tv & movies including The L Word, Backstrom, Girls Guide to Dating and most recently The upcoming miniseries When we Rise.